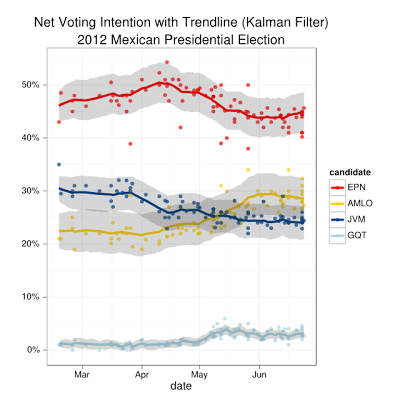 On Sunday, July 1, 2012 Mexican voters will go to the polls and elect a new president. In Mexico whichever candidate wins a simple plurality of the national vote is elected. Before the election of Vicente Fox of the PAN in 2000 Mexico had been ruled by a single party (the PRI) for over 70 years.

There are three main parties in Mexico:

My data comes from the poll of polls by ADN Político. I made some adjustments to the data:

My first idea was to simply model the presidential race using a dirichlet regression for all four candidates smoothed with splines. This ignores any effect each polling firm may have (some polling firms tend to favor one particular candidate) 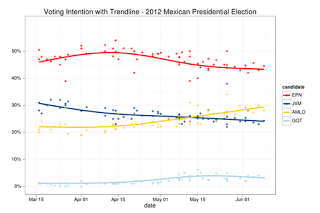 I later switched to a Bayesian method of pooling the polls. I’m using a Kalman Filter that corrects for House Effects (the bias of each polling firm) as described in Pooling the Polls Over an Election Campaign (pdf), by Simon Jackman (any mistakes are obviously mine). The only difference from the paper (a minor one) is that since Australia has two main political parties and Mexico has 3 main ones plus one small one, the precision is calculated a bit differently.

I could certainly have improved the forecast by taking into account the economic and security conditions in Mexico since those are the two issues which come out on top when voters are asked what they care about the most. But with virtually only one free presidential election having happened in Mexico (the 2006 one doesn’t count since it was very close) it would involve more time than I’m willing to commit. 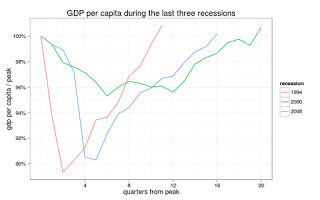 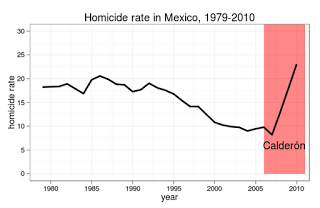 Given the security and economic situation in Mexico, once campaigning started Josefina Vázquez Mota dropped in the polls. Even former president Vicente Fox recently stabbed the PAN in the back and called on the electorate to vote for the front-runner Peña Nieto and accused the current president of violating human rights due to the drug war.

Mexico enforces a polling ban three days before the election (starting tomorrow) and there seems to be very noticeable trend in the voting intention of the candidates so I simulated draws from the posterior voting intention of each candidate and then used the auto.arima function from the forecast package to predict what the trend would be on election day.

The model could also be improved by using better priors for the house effect of each polling firm. For example, if you believe there is an institutional bias in favor of Peña Nieto and that the most thrustworthy pollster are Reforma, SDP Noticias and UNO TV then you’ll disagree with the estimate from the model I’m using with diffuse priors. 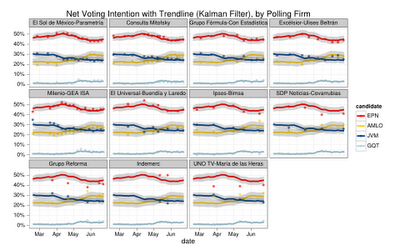 It would take an act of god for Peña Nieto not to be declared the winner on Sunday. The probability of AMLO beating JVM for the second place is 96%. 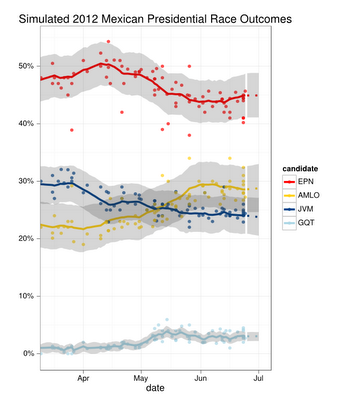 I may still be missing one or two polls in this analysis so be sure to visit my interactive chart for the latest info and forecast.

One thing is for certain: there is no stopping Enrique Peña Nieto; the PRI will soon be here. And I for one welcome our new prehistoric overlords. I’d like to remind them that as a trusted blog personality, I can be helpful in hiding crime statistics (under the bed) while the proletariat toils in their underground meth labs.