We can also compare the number of homicides to the number of deaths in the recently cancelled drug war-related homicide database (only including the first 9 moths of 2011) to find out which states had more drug war deaths than total homicides, which in theory should be impossible

*Saric, Sonora has been crossed out because the deaths were registered in Tubutama

With so many missing deaths I’ve opted to watermark the plots with a text that says ‘incomplete data’ since I could probably get better estimates by classifying the deaths of unknown intent, but I need access to the raw data which is not available yet. In the plot at the top of the blog Tuxtla is the safest city, but with 112 deaths of unknown intent and only 10 homicides this is extremely likely to be wrong.

By looking at the metro area homicide numbers you can miss diverging municipality level trends, so for La Laguna and Mexico City I’ve plotted the data grouped by state.
Since inside a metro area people travel all around the city it is more important to focus on the trend rather than the levels. In Mexico City the increase in homicides has been much more marked in the State of Mexico than in the Federal District, mostly due to trends in Ecatepec and Neza.

In La Laguna violence in the part of the city situated in Coahuila (mainly Torreón) increased while violence in the Durango part decreased (mainly Gomez Palacio)
Cities that saw big decreases in violence: 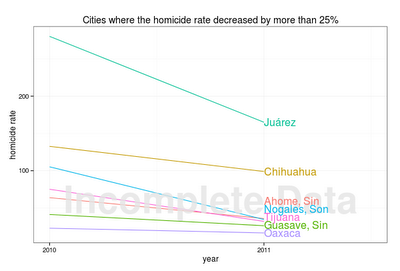 Cities that saw increases in violence: 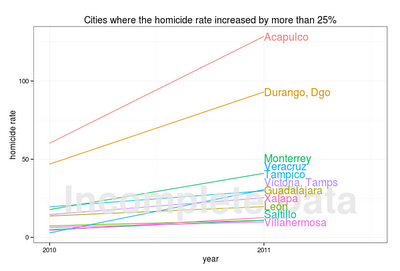 Cities where the homicide rate didn’t vary much: 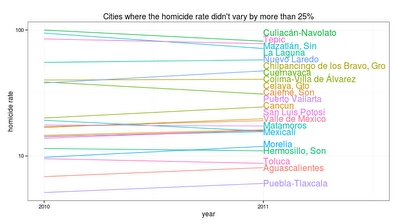 And the obligatory map: 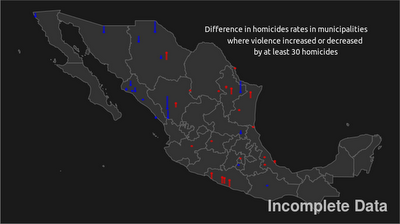