In Mexico City all ninth graders who want to enroll in a public high school (grades 10 trough 12 in Mexico) must take an exam called COMIPEMS. In order to ensure students are assigned in a fair way to a school of their choice the following steps are taken:


There isn’t a lot of information on how the COMIPEMS handles ties, but if they use a random algorithm to break ties at least in 2001 they used middle school GPA to break ties, and if we ignore the limited number of schools students are allowed to list, then COMIPEMS would be equivalent to a student-optimal version of Gale-Shapley.

In 2013 out of 310,163 student who registered for the test, 280,096 showed up, out of those, 33,695 (12.0%) were not admitted to any school because of the limited number of options they specified. But they can always apply to one of the low quality schools with excess capacity. It would probably be a good idea to encourage students to submit long lists that contain less preferred but still acceptable options.

In fact, the advice given at the COMIPEMS website is wrong (if indeed the admission process follows Gale-Shapley) since it specifically warns students to limit their options in the FAQ:

It would also probably be a good idea to allow schools to rank students based on different skills, some schools specialize in math, other in verbal skills. Perhaps even give priority to students with a sibling already attending one of their preferred options to make life easier for the parents. 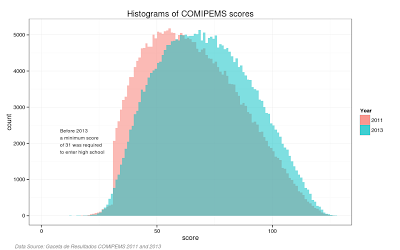 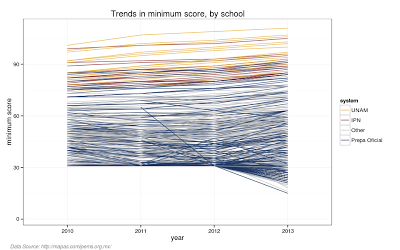 For some reason the 2013 scores went up compared to 2011. Even when taking into account that nowadays high school is mandatory and everyone is guaranteed a place no matter how low their scores. With a guaranteed spot I can see how the big discontinuity at score 31 would disappear in 2013 with some students slacking off since they are now guaranteed a place, but there was also an increase in the right side of the curve, so students this year were overall smarter (an improvement of 7 points is a lot).
2013
2011

With two exceptions, the top spots are schools run by the UNAM or the IPN. I wonder what the Preparatoria Oficial 99 is doing to attract so many smart students? If you look at the map the rest of the zone it is located in (Coacalco) has quite low scores.
In Mexico, high schools can be of three types: Bachillerato Profesional which is just like regular high school, you take courses in math, literature, and so on; then there is the Bachillerato Tecnológico where in addition to taking the normal high school subjects the students end up taking extra classes to get a certificate as an administrative assistant, computer technician and so on; finally, there is also the Carrera Técnica where no regular high school classes are taken and the students just end up with their certificate in graphic design or whatever. That big bump in the Bachillerato Tecnológico scores is due to the CECyTs run by the IPN which tend to be quite good. 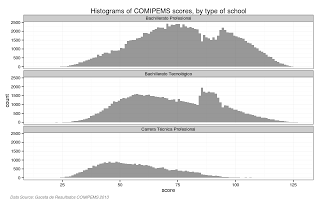 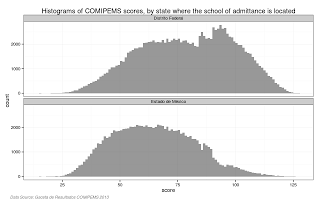 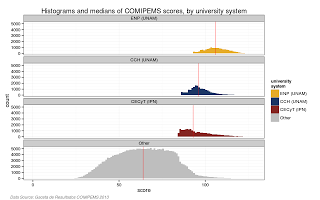 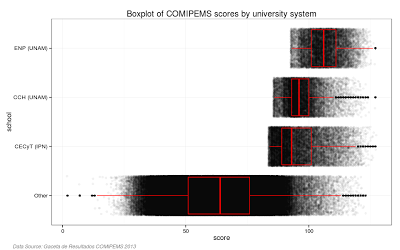 I wonder why the Preparatoria Agrícola Chapingo didn’t take part in COMIPEMS (it is considered quite good)?

We can also investigate whether there is a relationship between ENLACE —a test given to students in their last year of high school that divides them into insufficient, elementary, good and excellent based on their level of knowledge— and COMIPEMS quantiles (the black lines are loess):


Note that the CECyT 9s low percentage in the ‘good’ category is due to its high proportion of ‘excellent’ students as seen in the chart below (don’t forget to hover over the dots):

Bonus points if you guess which CONALEPs are cheating on their ENLACE tests!

When El Diario Oficial de los Mirreys Reforma ran a special section on the best high schools in Mexico City it made sure to exclude public schools from its rankings. Using ENLACE it is pretty easy to see how public schools stack up to private schools: 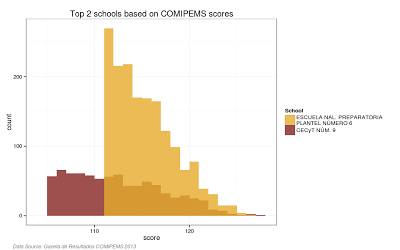 Since the CECyT 9 is the highest ENLACE scoring school in all of Mexico, the two best schools in the whole country are very likely public! Any ranking that excludes public schools is not based on any measure resembling school quality. Now if you wanted a ranking of the best schools for papalords…
The guys at the CECyT 9 are clearly doing something very well and they may indeed be adding value to the education of their pupils rather than simply taking in the best students. In the interactive chart of ‘excellent’ ENLACE students it is clear they are way above what you would predict from their COMIPEMS score. It would be nice if Prepa 6 would participate in ENLACE to be able to compare results. This certainly merits further research to see if the methods they use can be replicated at other schools.

The CECyT 9 is also the Mexican school with the most medals in the International Olympiad in Informatics, so it is overall very distinguished.

From all this I conclude it is no big deal if the students from the UNAM-run high schools get automatically admitted to the UNAM’s university system (if they also maintain an average of 70% and finish in at least 4 years). Ok, they could change the requirement to graduate in 3 years, still they are already very likely to be able to pass the admission exam based on their high test scores! But there is in fact one change the UNAM could do to improve dramatically the quality of its student body which will be the topic of my next post.

The code to replicate my analysis is available on GitHub

P.S. Yes, I’m fully aware the students at the top public schools are richer than average, and that in fact the subsidy they receive by attending public school is regressive. But they are not as rich as those attending the top private schools and I get to joke about it.