PISA 2006 was a world-wide test of 15 year olds, regardless of the grade they attended, in Math, Science and Reading. We can use the test results[PDF] to compare the quality of students and school systems within nations and between nations. Here is an overview of the results for Mexico: 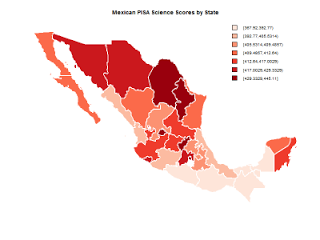 The highest scoring region in Mexico was the Federal District (Mexico City), which also happens to be the richest part of the country. Additionally it looks like the scores follow the “closer to Canada” rule.

Anecdotally I’ve heard many Mexicans (who have gone to American schools) claim that Mexican schools are better than US schools, and apparently so have other people. PISA lets us test this assertion empirically. Furthermore, the PISA scores for the science section are available broken down by ethnicity in the US, which allows us to make a more in depth comparison.

—A summary of findings from PISA 2006

The correlation between the science scores and the math and reading scores is higher than .9 so the comparison should apply to all areas of the test. 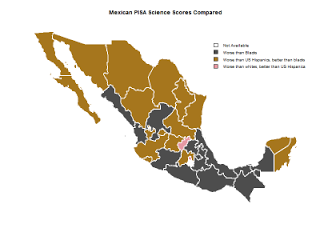 The DF (Mexico City) with a score of 445.11 and Queretaro with a score of 440.43 are the only states that do better (barely) than US Hispanics (439). Since the difference between Hispanic students in the US and Mexican students is so great, we can probably lay the blame on the school system and teachers in Mexico.

The results are averages and of course do not mean that there aren’t individuals of extraordinary abilities, just that the percentage who meet a high threshold is much lower in Mexico. And in fact the percentage of students that reach the highest two levels in the exam is 3% in Mexico, compared to an average of 9% across all OECD countries 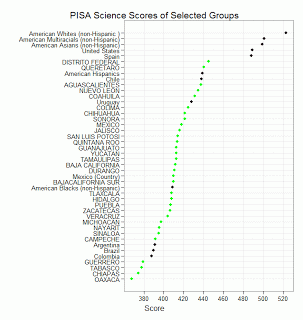 By world standards Mexico scores abysmally low, no wonder the government ordered the results of TIMSS-1995 destroyed before they could be published. I’m surprised that Argentina with the highest income per capita in Latin-America scores so low!
Not everything is bad news, now that teachers can no longer inherit or sell their jobs, and are chosen by a nationwide exam, test scores will probably go up.

Update: Only girls were tested in Chihuahua, and only high school students took the test in Michoacan