Many Eyes vs. Google Charts 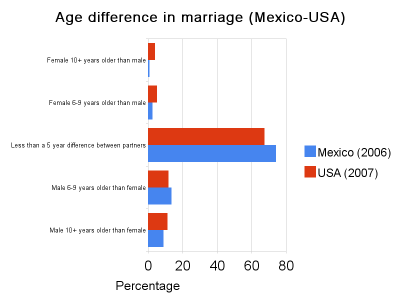 You can get the data for the chart here Although Many Eyes has more chart types (most of which output chart junk) its charts lack the visual appeal of Google Charts, plus Many Eyes is built with Java which means it’s slow and tends to crash my browser while Google Charts uses AJAX. I’ll stick with Google Charts for the time being. P.S. I was surprised by the fact that in the US there is a higher percentage of marriages where the male is 10+ years older than the female, it’s probably due to the fact that divorce is more common in the US.