Yesterday the INEGI released the GDP figures for 2009, and since it was an annus horribilis for Mexico, I thought I’d put up a couple of charts. Looking through the Banco de Información Económica I found two series of historical seasonally adjusted GDP data available:
I used a linear regression to combine both series, which I’m sure is wrong for some obscure technical reason only known to economists, but for a blog post I’m sure it is more than enough. 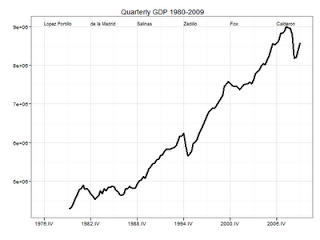 The GDP is in millions of pesos. You can clearly see why the 80s were a lost decade, and that’s not even taking into account that the population of Mexico increased by more than 10 million.
To calculate the GDP per capita I had to find the data for the 1980 census and extrapolate up to 1990, the first year for which I could find population estimates from the Conapo. 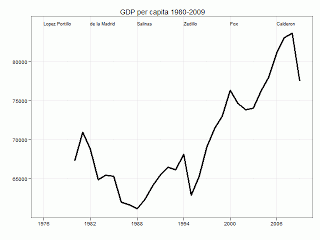 The 80s sure sucked. The dot.com boom combined with the recovery from the “december mistake” probably helped Zedillo achieve the highest growth rates. And, obviously, the current president is in negative territory.
Here’s what happened this decade: 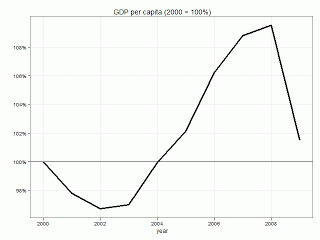 That was a fall of 7.3% in GDP per capita! Sigh… another lost decade