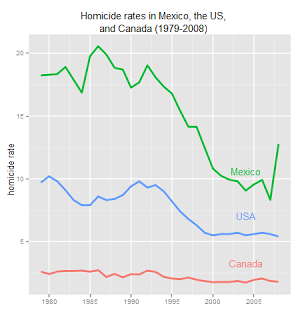 I’m surprised by how similar the trends are (excluding the drug war in Mexico). There were big decreases in the homicide rate in all three countries starting in the early nineties, which then slowed down around 2000. 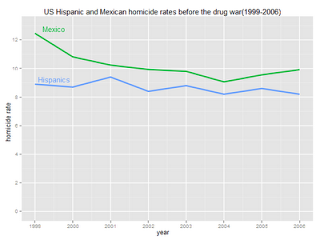 The homicide rates for Mexicans and Hispanics in the US are very similar, this is not surprising given that 2/3 of Hispanics are of Mexican descent (the median age in Mexico is 26 and among Hispanics 27). I wish there were data available for Hispanics before 1999 since there was a significant drop in the homicide rate in both Mexico and the US. If you look at the top chart the drop in the murder rate in the United States started slowing a couple of years before Mexico’s and that’s probably the reason for the bigger gap during the first years of the series.

Update: Here’s the first image with a log scale 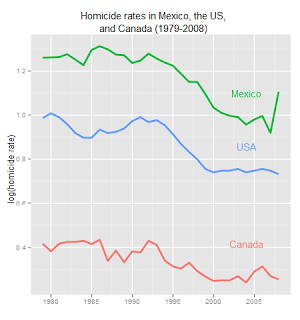