The director of the CISEN, the Mexican agency in charge of generating intelligence to safeguard Mexico’s security, said in a presentation yesterday that the number of homicides linked to the drug war was a little over 28,000 since the start of the Calderon administration.

Guillermo Valdés didn’t provide the raw data so I used Engauge to digitize the slide with the homicide data from the presentation: 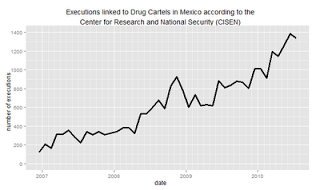 And here’s the original screen capture from the video: 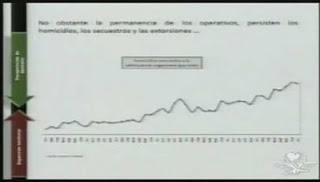 In spite of the permanent [joint police-military] operations, homicides, kidnappings and extortions persist…

Notice how the y axis doesn’t have a scale, but it didn’t matter since the total sums to 28,228. I simply set the scale arbitrarily and multiplied the monthly numbers by a constant so that they summed to 28,228.

We can also compare the CISEN data to the number of executions as reported by the Mexican newspaper Milenio. From January 2007 to July 2010 Milenio reported about 3,900 less executions than the CISEN. Even so, the trendlines are pretty close: 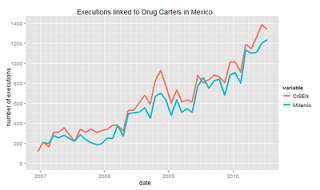 There was a temporary drop in the number of executions with the start of the joint operations in Michoacan (December 11, 2006) and Acapulco (January 15, 2007). Executions stayed constant for the rest of the year and then rose again around the time Joint Operation Chihuahua started (March 27, 2009), and just kept on rising, with a brief respite during early 2009, which was probably due to the reinforcements sent to Ciudad Juarez. The big increase at the start of 2010 was probably due to the Gulf Cartel reneging its alliance with the Zetas.

If the CISEN can get this kind of data one has to wonder why the Mexican Government gave the ICESI incomplete homicide data for 2009.

Mexican newspapers, as opposed to the Mexican government, include all drug-related homicides in what they term executions. In this post I’ve elected to use the term “execution” as used by Mexican newspapers rather than the government since they were the first to publish their data.

I’ve updated the Google Spreadsheet data and some of the numbers in this post to reflect the exact 28,228 drug-related homicides according to the CISEN.