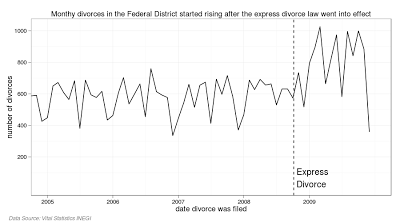 On October 2008 Mexico’s capital, the Federal District, approved a version of no-fault divorce locally known as “express divorce”. With the new law the requesting spouse no longer had to provide a cause to dissolve the marriage and the couple no longer had to live apart before filing for divorce. Furthermore, the process of determining child custody and alimony were now separate from the divorce trial. The Federal District has so far been the only federative entity in Mexico to adopt a less adversarial divorce system.

A quick look at the monthly divorce data in the Federal District shows that there is a strong seasonal component to divorce with a fall in the number filings during July, December and to a lesser extend January. But more importantly, it shows a big increase in divorces for the year after the law went into effect. The number of divorces filed went from 6,897 in 2007 to 7,410 in 2008, and 9,835 in 2009 (because it takes time to enter the divorces in the vital statistics database the number of divorces are under-counted by about 1% in 2008 and 5% in 2009) 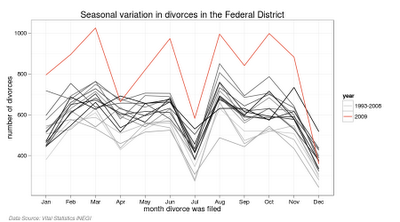 Fitting an ARIMA(1,0,0)(1,0,0)12 model to the divorce data with the strucchange package I find a structural change that coincides with the October implementation of express divorce. 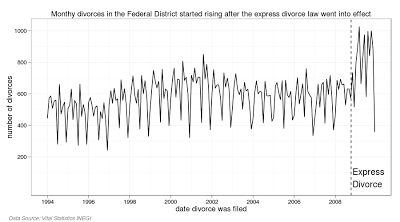 In Did Unilateral Divorce Raise Divorce Rates? A Reconciliation
and New Results Justin Wolfers argues that immediately after the United States adopted no fault divorce there was a big increase in divorces, but the trend reversed after about a decade, that is, the rise in divorces after no fault divorce was adopted was not persistent and the temporary rise may have been due to a backlog of couples who were in bad marriage but had postponed going through a burdensome divorce process.

Since I only have express divorce data for about a year I thought that one way to test if the rise in divorces was on path to becoming permanent would be to look at the trend in length of marriages among those who file for divorce, though of course, it is foolhardy to extrapolate from only one year of data since as more people become aware of the divorce law, they may take it into account in deciding whether and at what age to marry. Or maybe with the introduction of the new law divorce will become more socially acceptable and less stigmatized. 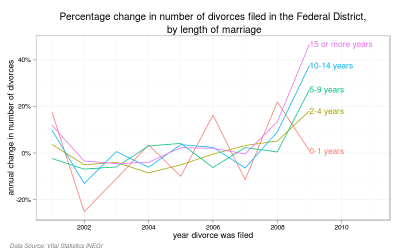 Here’s a table with the total number of divorces (instead of the percentage change) in the Federal District, by length of marriage:
The biggest increase in people filing for divorce was among those who had been married the longest, but remember the previous chart? If we divide the data into those who married in the Federal District and outside it, we come to a completely different conclusion.

Outside the Federal District


And among those who got married in the Federal District we see the opposite pattern: there was an increase in divorces among people who had been married a long time and for people who hadn’t been married long there was a big decrease, even though a law making it easy to get a divorce had just been passed. 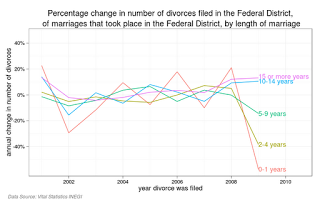 Why did divorces decrease in the Federal District? 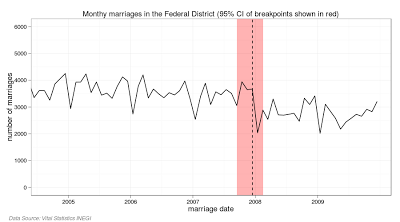 One clue lies in the fact that marriages fell in the Federal District a few months before the divorce law went into effect. In 2007 there were 41,427 marriages, in 2008 33,968, and in 2009 32,083. There are various reasons these could have happened
Basically I don’t have an all-encompassing theory of why marriage fell.