Proportion of marriages ending in divorce 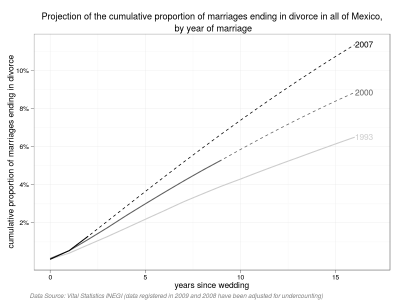 Over the last two decades families in Mexico have undergone rapid social changes. The proportion of marriages ending in divorce has risen for each cohort since data became available, this is independant of the recently approved express divorce law in the Federal District.

Looking at the the period during which marriages are more likely to end in divorce it seems there is a 3 to 7 year itch. 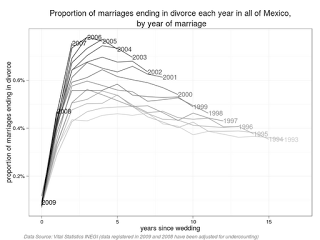 and by state we see that the rise in the proportion of marriages that end in divorce has been nearly universal across the states of Mexico, though, of course, there is some internal migration within Mexico and more recently people have been divorcing in the Federal District because of its more permissive divorce laws, so the numbers aren’t exact. 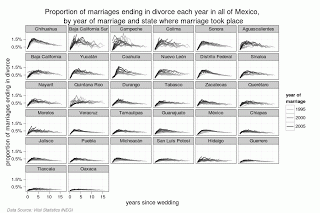 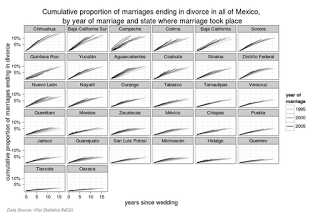 While it will take more than a decade to obtain long term marriage dissolution data for recent cohorts, the rising pattern looks very predictable and I used a multi-level model to predict future marriage dissolutions. The data has been adjusted because divorces registered in 2009 were under-counted by about 5%, and those registered in 2008 by about 1%. 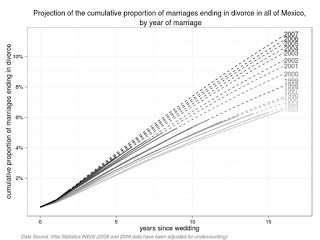 Cross country comparisons are always problematic, but comparing the percentage of all marriages that end in divorce in Mexico to first marriages that end in divorce in the US (not an apples to apples comparison!), the divorce rate would be lower in Mexico than in the US during the 1950s. See Figure 2 of Marriage and Divorce: Changes and their Driving Forces by Stevenson and Wolfers.

There are a couple of reasons why my assumptions in making the estimates may be wrong:
And let’s not forget that births outside of marriage are now a majority of births in Mexico, so looking at marriage dissolution provides only a partial look at what union dissolution is like