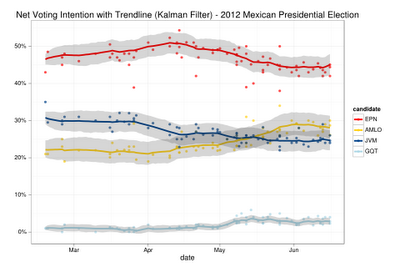 Time for another update of my poll of polls. With less than two weeks remaining until voting day the race is on! I mean the race for second place because Enrique Peña Nieto of the Partido Revolucionario Institucional has pretty much cinched the presidency for the next six years.

I’ve now switched to a Bayesian method of pooling the polls. I’m using a Kalman Filter that corrects for House Effects (the bias of each polling firm) as described in Pooling the Polls Over an Election Campaign (pdf), by Simon Jackman. I’m using diffuse priors for the house effects but I could probably switch to using the posteriors for each polling firm from the 2006 election, if I ever get around to modeling it.

The thing that worries the most is that polling firms tend to be highly variable, for example, in 2006 the most accurate pollsters were Reforma and GEA-ISA, but in the last elections they did not perform so well. Oh well, we’ll see what happens.

To recap from previous blogs