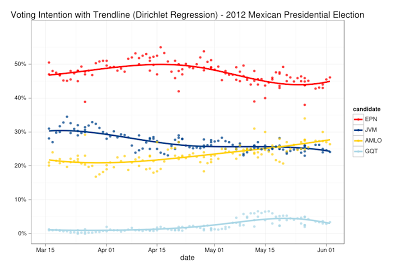 With the presidential election less than a month away and Noel Maurer baiting me into analyzing it, now is good time to start tracking vote intentions. But we have to keep in mind that since the 2006 election was won by .58 percentage points and before 2000 Mexico was ruled for 70 years by the PRI we really don’t have much data to go on. And most importantly, I don’t follow politics closely, if it wasn’t for a couple of big revelations shown during the debate I would have no idea there is a guy called Quadri running for president.

As a first step I grabbed the effective preference election poll data from the poll of polls run by ADN Político (are there other data sources?), but it seems to be missing some polls by El Universal-Buendía y Laredo, so I added them manually. I chose a Dirichlet regression since the votes for the candidates have to sum up to 100%.

The model is a gross oversimplification since some pollsters are biased and surely some are more reliable than others. I did not take this into account. The poll themselves are run over several days and I chose the mid-date of their date range as the polling date. Also, since I’m using effective preferences the algorithm to apportion undecided voters could be improved.

As we can see in the chart at the top of the post, Enrique Peña Nieto enjoys a commanding lead over his rivals, although he has fallen somewhat over the last month. López Obrador is now solidly in second place and Josefina Vázquez Mota has fallen to third place after a long downward trend. Gabriel Quadri is last, but his polling went up after the debates.

In the next chart I compare the different polling organizations against the trendline. Being far from the trendline doesn’t necessarily mean the pollsters are biased —it may be that the pollster with many outliers actually has the best poll and all the rest are biased. I’m just trying to get a feel for the way each pollster trends. And yes, you can guess which poll was conducted by Reforma just by looking at the big yellow and red outliers near the end of June.
The poll run by GEA-ISA has some weird sinusoidal artifacts. That means they are doing something wrong, plus since they run the only daily tracking poll their results tend to dominate my trendline estimates. I ran the Dirichlet regression again excluding GEA-ISA and the results are very similar, with Peña Nieta a little lower and López Obrador a little higher.