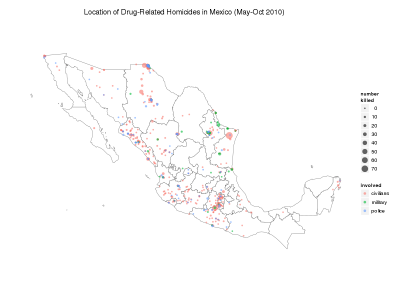 The above map was made using data collected by Walter McKay, mainly from El Universal and El Diario reports. The data is stored as a Google Map and is already structured to include the number of deaths. That saved me a lot of work!

Since the map contains the original newspaper story as metadata I performed a simple grep to determine if those involved in the aggressions were only civilians (both innocents and cartel gunmen) or whether some of those involved —though not necessarily killed— belonged to government forces.

However, there are some caveats to keep in mind:
But in spite of this I still believe that the map gives a good overall picture of what has happened this year. You can see how violent Sinaloa has become and how most of the deaths which involved the military have been concentrated in northeastern Mexico and Guerrero.

According the Mexican Department of Defense there have been a total of 565 civilians (both innocents and cartel gunmen) killed by military forces since the start of the drug war. The total for each state is the following:


According to the Mexican military there have been a total of 191 soldiers killed, so ignoring the fact that the civilian deaths include innocents and a difference of one month in the periods reported, that would give a kill ratio of 3.5

Perhaps not surprisingly, going by press reports, most fatal incidents involving innocent civilians and the military have occurred in Tamaulipas and Nuevo León; however, let me emphasize that there are no official records of innocents killed.

According to the Mexican government most of the drug war deaths are the responsibility of the Sinaloa Cartel. And yet the cartels with the biggest presence in the states with the most civilians killed would be the Gulf Cartel and the Zetas, battling each other in Tamaulipas and Nuevo León; and the Beltrán Leyvas and the remnants of “La Barbie” organization battling in Guerrero.

And if you’re wondering why there hasn’t been much drug cartel activity in the central part of the border, here’s a map of Mexican highways and an interactive one made with this spreadsheet and Openheatmap: