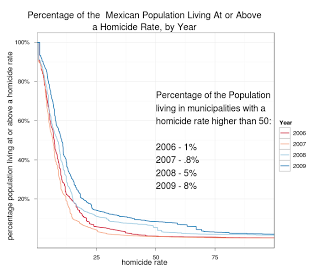 According to security spokesman Alejandro Poiré violence in Mexico is a regional phenomenon since 85 municipalities concentrate 70% of drug related homicides. While it is certainly correct to say that not all of México has suffered from the drug war, it is misleading to present the percentage of total homicides concentrated in a few municipalities as evidence. Municipalities have different populations and furthermore drug related homicides increased from 2,826 in 2007 to 15,273 in 2010 which makes it even harder to interpret the percentages.

A much better way to show the the concentration of violence is to calculate the percentage of the Mexican population living at or above a homicide rate. Since it is much more trustworthy than the drug related homicide database Poiré uses, I decided to use the recently released mortality database as my source.

Number of people living in a municipality with a homicide rate above 50:

Number of people living in a municipality with a homicide rate above 10:

While it is certainly true that violence is concentrated, the number of people suffering its effects has increased greatly.