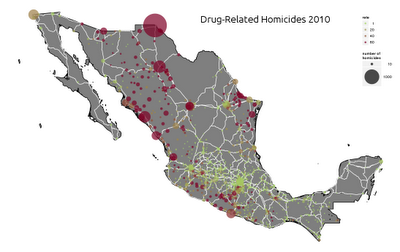 Just by looking at the map it is obvious that the drug war is a dispute over the drug traficking routes to the United States; Mexico’s drug-producing regions of the “Golden Triangle” and “Tierra Caliente,” where lots of meth labs are located and opium poppies and mariguana is grown; the ports where cocaine and the precursors for producing methanpetimes arrive; and the routes to the airports in Cuernavaca and Mexico City (though maybe in Mexico City the local drug market is big enough to be important).

Hermosillo, Ciudad Obregón, Agua Prieta, Saltillo, Monclova, Ciudad Acuña and Piedras Negras seem to have relatively low levels of violence given their closeness to the U.S. Border. Is it because they are firmly under the control of a single drug cartel? The drug-related homicide rates for Tijuana and Mexicali are likely underestimated in this dataset given their high homicide rates.

Since the drug related homicide data was only released at the municipality level, I calculated the centroids of the municipalities taking the population weighted means of the latitude and longitude of the localities within each municipality based on the 2000 census.

These maps give a good idea of what has been happening in Mexico during the last few years:

There was an increase in homicides in 2006 in Michoacán and as a result of this at the end of the year President Calderón sent troops to pacify the region. The following year México had the lowest homicide rate ever, and then in 2008 the Sinaloa Cartel started a war with the Juárez Cartel, betrayed one of their high level operatives nicknamed “El Mochomo,” and backed “El Teo” to try and take control of the drug traficking routes in Tijuana.

In 2009 Michoacán once more turned violent and the federal government again sent troops to pacify the region. A the end of the year the brother of “El Mochomo” was killed in Cuernavaca and this sparked a surge in violence in Sinaloa and Guerrero as the Sinaloa Cartel tried to destroy the remains of his organization once and for all. In 2010 the Gulf Cartel went to war with the Zetas which is why northeastern Mexico turned red.