Tijuana is more violent than ever 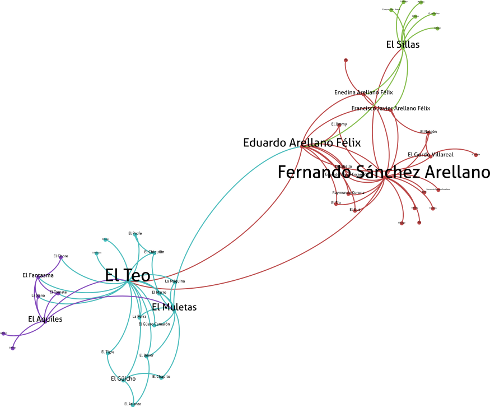 The security strategy implemented in Tijuana has been praised to the stars and is frequently portrayed as the way to beat the cartels. The L.A. Times wet so far as to claim that Tijuana’s chief of police Julián Leyzaola Pérez was “the model for the kind of law enforcement muscle the Mexican government needs to battle organized crime.”

Most of praise was due to claims of decreases in homicides in 2009 and 2010 compared to 2008. However, a close look at the recently released 2009 mortality database paints a completely different picture: 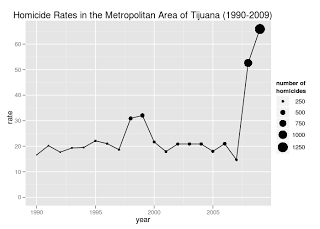 There was also a dark side to Leyzaola’s tactics which included lots of heavy handed policing: instructing his bodyguards to shoot drug traffickers in the head, kicking the dead body of a cartel gunmen, and allegedly torturing police officers he suspected of being in the pay of drug cartels.

As you can see in the following chart Joint Operation Tijuana had no effect on the number of murders —even thought the army confiscated the weapons of the police and they had to arm themselves with slingshots. Then there was a rise in the number of homicides around New Year in 2008, an astoundingly steep rise that started around the second half of September 2008 and lasted until the start of December, and yet another steep rise at the end of 2009. 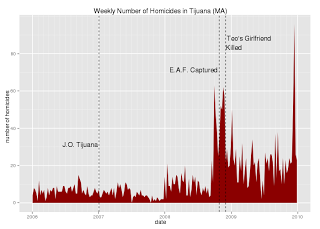 Not only did homicides increase, but also other types of crime (data for all of Baja California):

Leyzaola became chief of police on December 10, 2008, right when the first wave of violence was ending. He started implementing his reforms, which included greater cooperation with the army and purging the police department, in January of 2009.

The basic problem in Tijuana is that one of the high level operatives of the Tijuana Cartel switched teams and started operating with support from the Sinaloa Cartel. According to various newspaper stories “El Teo” broke off sometime during the first months of 2008 and later in the year started an all out war against the remaining members of the Tijuana Cartel to control all the trafficking routes in Tijuana.

Here’s a look at the network structure of the Tijuana Cartel (work in progress):


Back when in the late 90s and the early 00s when Benjamin and Ramon Arellano Felix were the leaders of the Tijuana Cartel it had more of a hierarchical structure. However, as each Arellano Felix brother was captured or killed the cartel lost its strength. Eduardo Arellano Felix was the last of the free remaining brothers, and he was captured at the end of 2008. After the capture of Eduardo, Fernando Sánchez Arellano, son of Enedina Arellano Felix, became the leader of the Tijuana Cartel. With the cartel weakend it is not surprising to find it full of shifting alliances. “El Sillas” and “El Gordo Villareal” were the main gunmen tasked with battling it out with “El Teo”.


The Sinaloa Cartel is more of a federation of cartels than a top down organization. It has various bosses, the most important one being “El Chapo Guzmán”. The faction backing “El Teo” was the one headed by “El Mayo” Zambada, although according to Leyzaola “El Chapo” sent an emissary to try and bribe him —though he may just have said it to prove that not even the Mexican equivalent of Bin Laden could corrupt him.

I believe “El Teo” operated with some independance from the Sinaloans even as he depended on them for gunmen, safe houses to hide in, and drugs to cross into the US.

“El Teo” was captured in January 2010, and his successor “El Muletas” was captured in February, however his gang is far from finished. Two distinct factions of the remains of “El Teo” still operate in Tijuana with the backing of the Sinaloa Cartel: “El Guicho” and “El Aquiles”.

In late 2010, one of the guys in charge of fighting “El Teo”, “El Sillas”, broke off from the faction of the Tijuana Cartel headed by Fernando Sánchez Arellano (“El Ingeniero”) and started a war his former boss and the Sinaloa backed remains of Teo’s gang, he kidnapped “El Mayo” Zambada’s niece (she was rescued by the army) sparking yet another round of violence. He may also have been responsible for the 134 ton drug bust that belonged to the Sinaloans.

Since “El Mayo” Zambada felt it was safe enough for his niece to travel to Tijuana it is very likely he entered into some sort of agreement with Fernando Sánchez after the capture of “El Teo” to let his drug shipments through without violent confrontations.

If we look at the daily number of murders we can see some interesting patterns. In mid September a prision riot was started by the brother of “El Muletas” in which 19 people were killed (over different days). Violence skyrocketed after that: sixteen bodies were found with signs of torture scattered around Tijuana and then one of the leaders of the Tijuana Cartel, Eduardo Arellano Félix, was captured.

Violence rose again after the capture, and then a girl who supposedly was Teo’s girlfriend was killed in a failed kidnapping attempted, as revenge El Teo killed people close to Fernando Sanchez and allegedly El Teo and El Ingeniero entered into a truce after that. This coincides with the fall in homicides in the early days of December. Violence then stabilized at an incredibly high level until December 2009 when it shot up again (homicides for December 2009 are under-counted by 25% because of the cutoff date for entering homicides into the database). According to Zeta Tijuana the increase in violence was due to the Federal Police stealing a meth shipment from Tijuana’s airport and handing it to “El Sillas.”

Then in early January 2010 “El Teo” was captured and by all accounts violence receded from the peak it had reached in December. The successor to “El Teo”, “El Muletas”, was captured in February. There’s no data on homicides for 2010, but there is data from the drug-related homicide database: 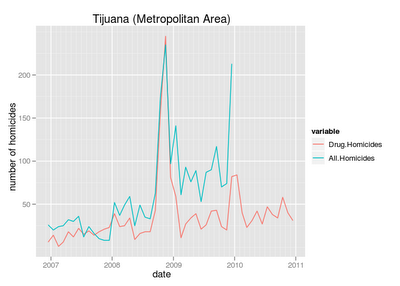 Interestingly, if we look at the pattern of who certified the deaths and wether an autopsy was performed we find a structural change right when drug related and the total homicide databases start to diverge: 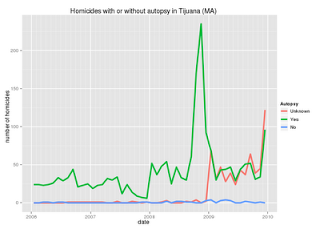 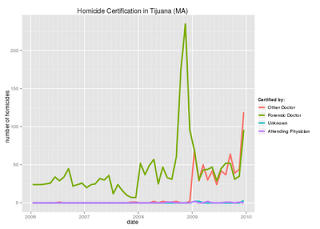 Just because the difference between all homicides and drug-related homicides increases after Leyzaola was named chief of Police doesn’t mean he is responsible since the same pattern is apparent in Mexicali.

And the difference may have just occured because a lot more non-drug related crimes were committed while Leyzoala was chief of police. Though given the daily pattern of homicides I’m very skeptical of this. One way to test this hypothesis would be to wait until the 2010 data is released and see if there was a big drop in homicides after “El Teo” and “El Muletas” were captured, if there were one, we could assume most of the crimes in Tijuana were drug related and the government under-counted drug related homicides.

We can also compare the total number of homicides in 2008 and 2009 from the INEGI with other homicide sources:

And the correlation between gun homicides and drug related homicides is different in Tijuana than in other parts of the country.

To make sure that homicides were not being misclasified as other types of violent deaths I also checked deaths by accident and suicides. Violent deaths other than homicide stayed constant throughout 2006 and 2009 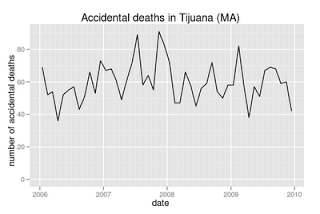 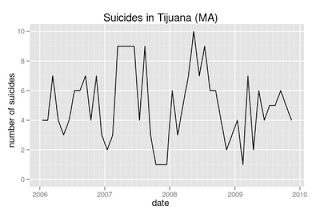 These are some big discrepancies from the different sources of homicide data and given the praise garnished on Tijuana’s security strategy it is of utmost importance to clarify them. Especially given that Leyzaola has now been named chief of police in Ciudad Juárez and his model has been exported to other cities.

My best guess is that Leyzaola just got lucky to be named police chief right when the truce between the cartels started and then for some reason homicide numbers based on police reports (including those in the drug related homicide database) were under counted furthering his mystique. But he had very little to do with the ebbs and flows of violence in Tijuana.