Former Mexican Army general Jorge Juárez Loera was shot dead last Saturday when getting out of his Mini Cooper after a traffic accident in Mexico City.

Juárez Loera had just retired on May 16th after turning the mandatory retirement age of 65. Before leaving his post he was an Oficial Mayor of the Secretary of Defense, the third most position in the Mexican military. 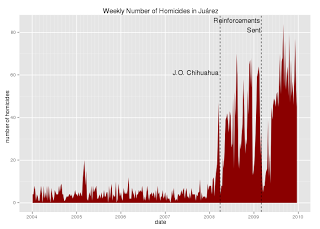 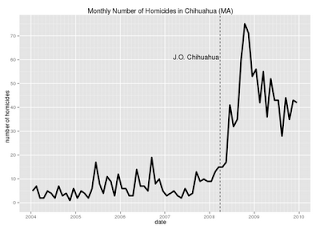 Juárez Loera rebuffed critics of the rising death toll by saying: “I would like to see reporters change their articles and instead of writing about ‘one more death’, they should say, ‘one less criminal.’ “

In July 2008 General Espitia replaced Juárez Loera as the head of J.O. Chihuahua. Four of the military bodyguards assigned to protect his wife were attacked while traveling in a Cadillac Escalade reported stolen in Durango. Two were killed. 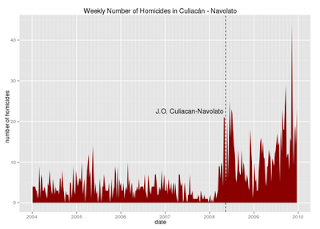 This presentation [pdf] by Alejandro Poiré mentions that the operation in Culiacán was expanded into Mazatlán in July. As in Culiacán and Navolato there was a subsequent rise in homicides: 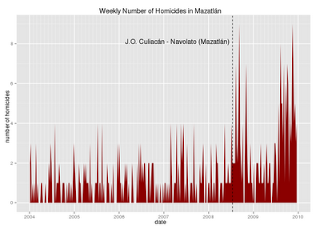 Looking at the drug-related homicide rates we see a similar pattern. Noé Sandoval, the general in charge of Joint Operation Culiacán-Navolato, was promoted in December 2010 to be commander of the IV Military Region headquartered in Monterrey, Nuevo León.


Since the Mexican government views violence among cartels as a sign of success, it should come as no surprise that Generals with records of failing to stop the rise in homicides are promoted.

Two more generals have suffered attempts on their lives: Tello Quiñones who was kidnapped and killed by Zetas from Morelia, Michoacán. Before retiring and serving as a security consultant to the police force of Cancún Tello Quiñones was the commander of the 21th military zone in Morelia, Michoacán during 2007, where one can only assume he battled the Zetas. It is interesting to note how unlike in Chihuahua and Sinaloa, military operations in Michoacán were correlated with decreases in homicides: 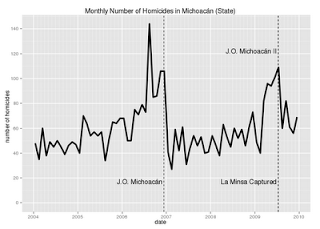 The other general who suffered an attempt on his life was Acosta Chaparro, he was shot in the abdomen during an attempted robbery in 2010. Acosta Chaparro was sentenced to prision in 2000 because he allegedly received money from Amado Carrillo Fuentes. However in 2007 he was exonerated of all charges and set free.