Crime at the municipal level

The Mexican government recently released crime data for 2011 at the municipality level. Sadly, it is no disaggregated by month, but beggars can’t be choosers. To analyze the data I made an interactive map with d3 that includes the locations of the municipalities with the highest drug plant eradication and a 2d kernel density estimate of the location of meth labs based on newspaper reports.

The data is not without problems since Acapulco actually came out on top as the most violent urban center (metro areas or municipalities not part of a metro area with more than 100,000 people) in Mexico, and while violence has certainly increased in the port city during the last few months —it may even have been the most violent city in Mexico during August— there is no way it is more violent than Ciudad Juarez taking into account the whole year. 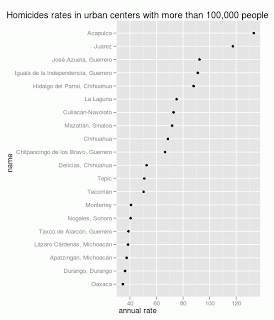 Mexico has an epidemiological monitoring system, it is designed for transmissible diseases like influenza rather than violent deaths. There is always some delay in recording homicides since by law you have to perform an autopsy and the police are involved; however, Chihuahua is one of the few states that records homicides in a more or less timely manner, even if the data is still incomplete. Checking the data in the epidemiological system there were 1,176 murders in Juárez through July (the last month available) compared to 1,055 in the police database through August (one extra month).

To believe the SNSP data you’d have to posit that doctors are making up homicide certificates and recording them each month in the epidemiological system so that the monthly numbers match the final data. Homicides in Juárez are down from the same period in 2010, but the police case data from the SNSP is plain wrong.

A similar thing happened in 2010 when the SNSP reported 3,806 total murders in the state of Chihuahua compared to 4,427 drug-related (or organized crime) murders. Stuff like this probably happens because there are many victims per police case. It’s pretty sad when doctors are better at recording crime than the police.

Durango, Durango is another municipality that shows a big discrepancy, with a preliminary 421 homicides (including the mass graves) in the epidemiological system and 143 in the police database.

Looking at other crimes it is not surprising that kidnappings were high in certain regions of Durango and Tamaulipas where mass graves were found. The Zacatecas, Morelia, and Villahermosa metro areas also have worryingly high kidnapping rates and are hot spots of drug cartel activity.

And if you want to look at historical homicide data you can’t do better than this map by Stanford student Dorothy Kronick: