Violence in Monterrey after Cadereyta 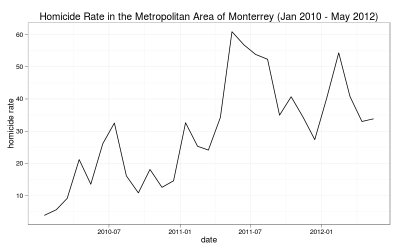 After 49 bodies were dumped on a highway leading from Monterrey to Reynosa you would have expected May to have been a particularly violent month in the Monterrey metro area. Instead it was one of the least violent months of 2012. Still, violence is an order of magnitude above what is was before the Zetas broke from the Gulf Cartel.

The state of Nuevo Leon, unlike Chihuahua, Baja California, Durango or Veracruz is usually pretty good at reporting known homicides, including massacres and known mass graves, so while the data is not 100% trustworthy it can be considered to reflect homicide counts as publicly known. Though that still leaves the issue that the Mexican government so far has been unable to identify a single one of the victims of the Cadereyta massacre which would imply that there may be more mass graves we just don’t know about.

Looking at the data broken down by municipality violence was going up in Cadereyta before the massacre occured. At the AGEB level there is a somewhat inverse relationship between population density and homicides, so while populous municipalities certainly have more homicides, that does not wholly explain differences in number of homicides.