Map of homicides in Monterrey


This a somewhat cleaned up 2d density map of homicides in Monterrey as reported by El Norte during all of 2012. Do take note that the map is of homicide locations rather than counts and that I removed a couple of non-homicide events that were present in the original data.

Monterrey is surrounded by mountains and if you notice in the map the area around Topo Chico “bleeds” into the mountain, so it would probably be a good idea to use a more complicated model, taking into account the natural boundaries of Monterrey, to estimate the density of homicides. 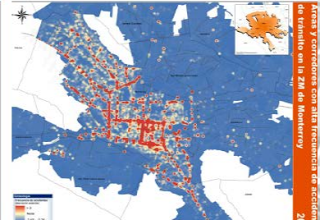 In this presentation by Arturo Cervantes you can see that the areas with the most homicides kind of match the locations of motor vehicle accidents. The central part of Monterrey is actually less population dense than other areas, but apparently everybody travels there for work or play. And since everybody is there, that’s where most homicides happen.