Interactive map of the drug war in Mexico - 2012

It’s that time of the year again when I update the interactive map of the drug war in Mexico. The map now uses 30 day months to calculate homicide rates and the new CONAPO population estimates. As usual there is also a Spanish version. All deaths registered without a date of occurrence were assumed to have occurred in the same month they were registered and all deaths without a municipio of occurrence were assumed to have taken place where they were registered. Various events are worth checking out:

For the adjusted homicide data I did the following:

I again classified all deaths of unknown intent into accidents, suicides and homicides based on the age, sex of the victim and injury mechanism by which the death occurred. The method I used is similar to the one I used in my Juarez post (with a penalized regression for Sinaloa and knn for the rest of Mexico). For example, if someone told you to guess the intent of the death of a 70 year old woman who died in Merida by motor vehicle, you’d probably guess it was an accident. If you had to guess the intent of the death of a young male in Acapulco who died by firearm, you’d probably think it was an homicide. 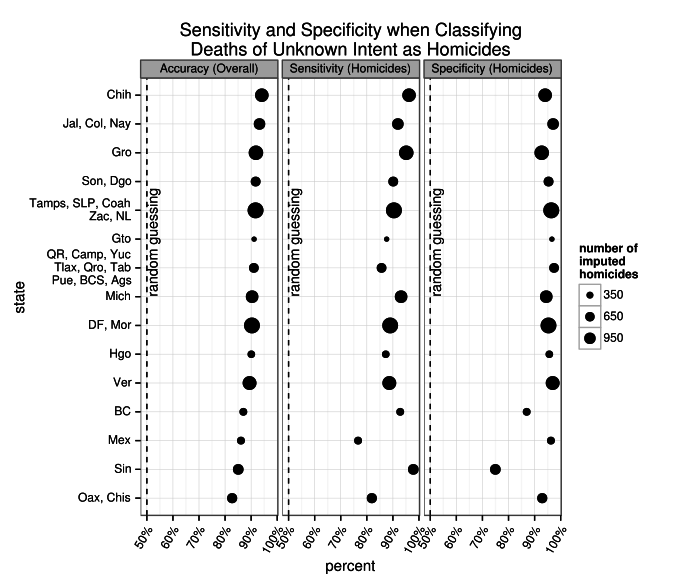 The problems with the data in the Federal District and Sinaloa were also corrected.

I also added the mass grave in Taxco and the one in San Fernando since they either don’t appear or are incomplete in the dataset from the INEGI.

P.S. You can download a csv with the data from the projects page