What has been the impact of the economic crisis on employment? And how has it affected the different regions of Mexico?

To answer the questions the first step was to obtain the unemployment data from the Banco de Información Económica at the INEGI. The data is available only at the state level, and not at the county level. Here’s a chart with the unemployment rate for all of Mexico: 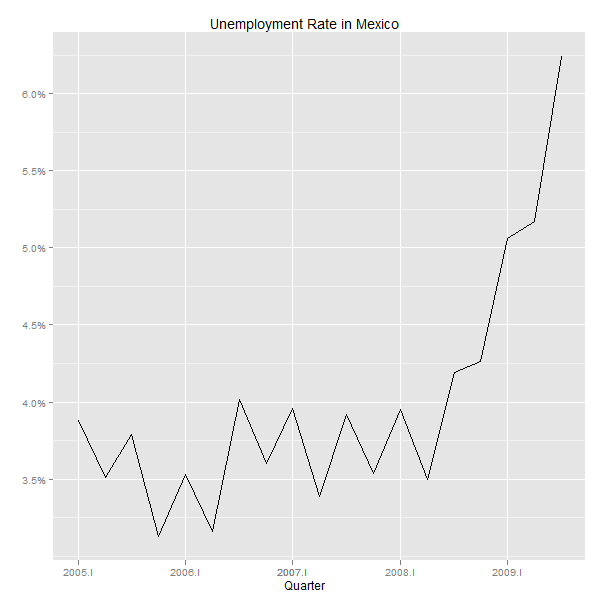 The second step was to download a map Mexico from the ICESI. The INEGI has a bunch of maps with much higher resolution, but the one from the ICESI had the smallest memory footprint of any map I could find, and since we are not going to print out the map, it is the one I used.

While preparing the data I noticed that the map had a state called “Baja California Norte,” in real life no such state exists. When merging the unemployment data with the map from the ICESI it was easier to just add a column with the values from the map, so yes, I’m aware of the mistake, don’t blame me if you decide to use it to label states.

Lots of unemployment in the Northern and Central Mexico, no surprise there, since it is tightly integrated with the US economy. Coahuila and Chihuahua have the highest rates at 9.72%. The south, being less developed and less reliant on exports to the US, has a lower unemployment rate. Oaxaca has the lowest rate with 1.74%. Notice the darkening of Quintana Roo (where Cancun is) in 2009 because of the swine flu

The source code to generate the charts is available from Github