My email list is pretty simple: one email for each new post or project. If you join over 5,000 subscribers from Harvard, Stanford, Google, McKinsey… you’ll receive as a welcome gift the 100+ shapefiles of Mexico mentioned in this post and any updates (It’s more than 5GB of data and totally free) 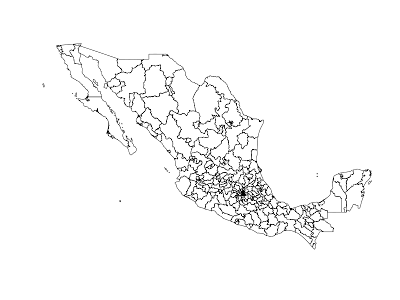 I’ve created a set of scripts to download and recode shapefiles from the IFE and INEGI. Once you run the scripts you’ll find in the map-out directory:


Since the IFE uses a different coding standard for the municipalities of Mexico than the INEGI, I’ve recoded the municipality codes so that they match the ones the INEGI uses.

These codes are only available for the secciones electorales (precincts) shapefile and they are contained in the variables:


The codebook for the the census data that comes with the distrito and sección shapefiles is in the FD_SECC_IFE.pdf file and the ife and inegi codes are in the ife.to.inegi.csv file. I also suggest you check out Rob Hidalgo’s repository of public information (from freedom of information requests) which includes a shapefile of the municipios of Mexico according to the IFE (my version comes from the INEGI and they differ by a few municipalities)

Update: You can also use a docker image to run the program without installing anything