The most dangerous days of the year

When looking at days of the year with the most homicides a pattern jumps out: violence is significantly higher during certain holidays in Mexico compared to the rest of the year. This is a well studied pattern in other countries. 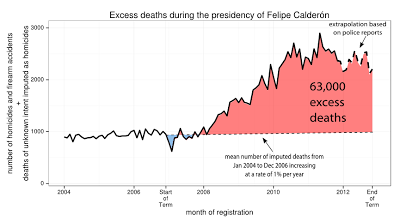 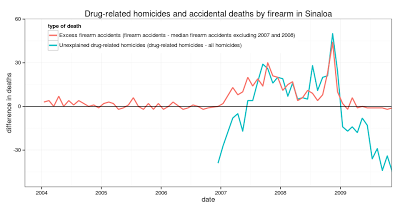 Mexico’s most dangerous cities for women 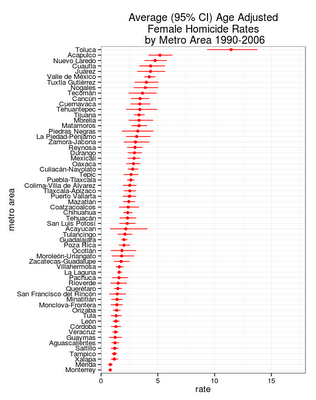 Before the drug war the metro area of Toluca was by far the most violent city in Mexico for females and not Ciudad Juarez as commonly believed, in fact, when cities are ranked by their age-adjusted homicide rates from 1990 to 2006 (right before the drug war started) Juárez was not much more violent than Mexico City (Valle de México in the chart). 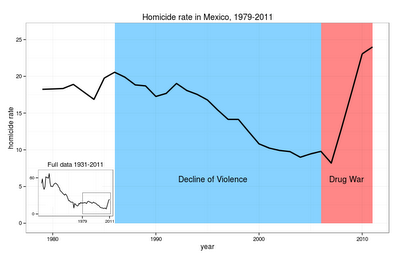 Ever since the end of the Mexican Revolution and the Cristero War violence in Mexico inched down in fits and starts from a high of about 60 homicides per 100,000 people to its lowest level sometime during the middle of the last decade (there’s some uncertainty about the number of homicides in 2007). Then, the drug war happened and the homicide rate shot straight up.

After reading The Better Angels of Our Nature: Why Violence Has Declined, by Steven Pinker, and looking at reviews of the literature on homicide decline in Europe, it seemed to me as if some of the posited reasons for the decline of violence would involve strong cohort effects —each generation successively becoming less and less violent. This immediately reminded me of Mexico, and so I decided to take a quick look at the data:

Drug use and seizures in the U.S. 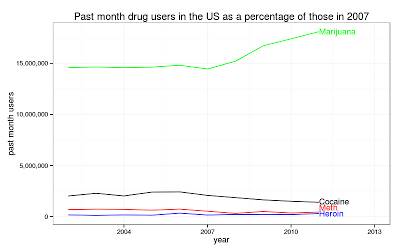 According to data from the National Survey on Drug Use & Health 2001-2011 marijuana and heroin use are up, but cocaine and methampethamine use are down. (Data on methamphetamine consumption was statistically adjusted to account for survey changes)

Visit the interactive map of homicides

Having just posted on violence along Mexico’s northern border, I figured it’s time to analyze what is happing south of Mexico where some countries have experienced sharp increases in homicides.

Homicides along the United States–Mexico border 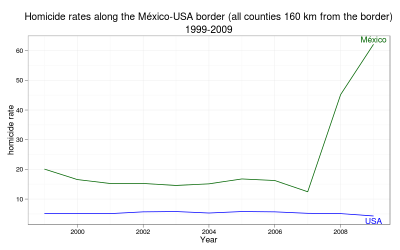 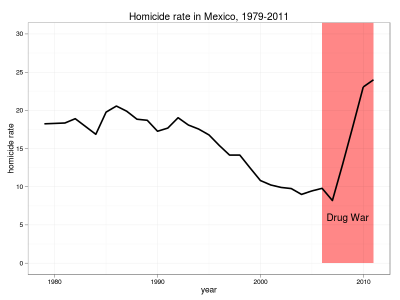